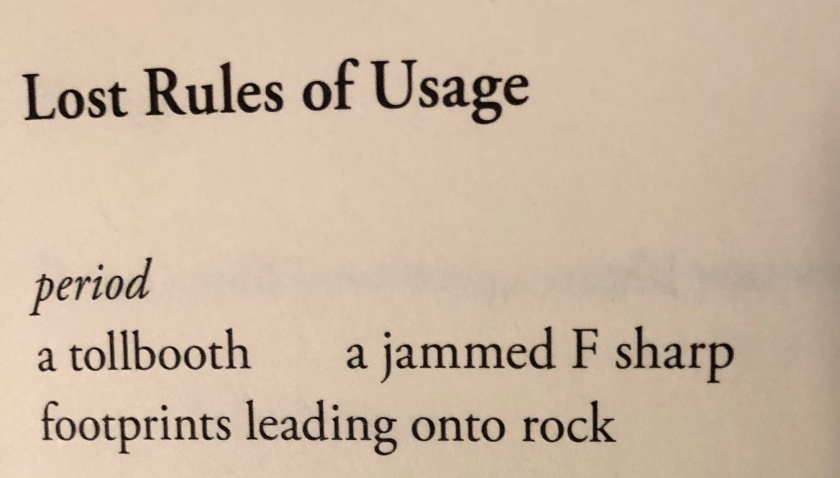 If we agree that the form of a poem emerges from our experience as readers (the word form may also refer to generic distinctions between kinds), it is useful to consider Wittgenstein’s key concept ‘form of life.’ (‘Life’ refers to the practices of those who habitually express themselves with given expressions.)

Poems ‘go on’ by following the ‘grammar’ of the words in use: the rules governing meaning in the community of users. Those are the rules, as we say—-exceptions taking their import from departure from the given rules.

One upshot of this approach to form is the prejudice against ‘private languages.’ Poets struggle with this prejudice all the time, early in the process of shaping a poem preferring what is in your head to what is communicated on the page. But that just won’t do. There’s an ethical aspect to composition: authentic participation, however ludic, in a form of life.

The concept of ‘branching’ has been suggested to get at the formal process. (See Philosophical Investigations 47). One thing leads to another, every extension (line, half-line, stanza, etc.) drawing new sense out of what’s there.

The poet’s progress depends on increasing mastery of the relevant ‘language games’ that make communication possible.

Tom D'Evelyn is a private editor and writing tutor in Cranston RI and, thanks to the web, across the US and in the UK. He can be reached at tom.develyn@comcast.net. D'Evelyn has a PhD in Comparative Literature from UC Berkeley. Before retiring he held positions at The Christian Science Monitor, Harvard University Press, Boston University and Brown University. He ran a literary agency for ten years, publishing books by Leonard Nathan and Arthur Quinn, among others. Before moving to Portland OR he was managing editor at Single Island Press, Portsmouth NH. He blogs at http://tdevelyn.com and other sites. View all posts by Tom D'Evelyn